The Endocannabinoid System: What is It and How Does It Work? 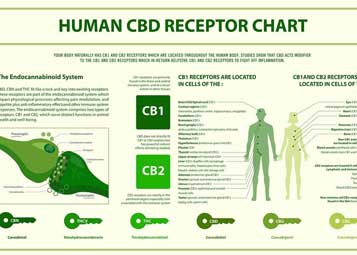 The body is made up of several systems which work together to ensure that humans function optimally. One of the most vital systems in the body is known as the endocannabinoid system. In this post, we will explain what this system is and how it performs its work.

What is the endocannabinoid system?

The endocannabinoid system is a nerve signaling system that is responsible for the regulation of the function of the central nervous system (CNS). This system also aids the maintenance of homeostasis, which refers to the state of body equilibrium. Homeostasis is essential for optimal functioning of the organs as well as the maintenance of emotional, cognitive, and physiological balance in the body.

How does the endocannabinoid system work?

To explain how the endocannabinoid system works, we need to describe its various major components and how they interact. The three components of this system are discussed below:

These are the molecules that are produced in and by the body. Their effects and structures look like the cannabinoids found in cannabis plants. Currently, two types of these endogenous cannabinoids have been discovered. The first one is anandamide (AEA) whereas the second is called 2-arachidonoylglyerol (2-AG).

The body synthesizes these compounds based on their needs at any given time. Otherwise known as endogenous cannabinoids, these endocannabinoids assist in guaranteeing the smooth operations of the internal organs.

Once the endogenous cannabinoids have performed their roles, they need to be broken down. Notably, two types of enzymes are in charge of the breakdown. Fatty acid amide hydrolase is responsible for breaking down AEA while monoacylglycerol acid lipase will ensure the breakdown of 2-AG.

Although numerous things have been studied about how this system functions, tons of things are still unknown. Hence, there is a need for further studies on how the system works.

Other body’s systems influenced by the endocannabinoid system

Expectedly, the endocannabinoid system doesn’t function alone as its performance affects other systems in the body. The affected systems include

Without a doubt, the endocannabinoid system is a vital system that stabilizes and promotes the internal processes of the body.